When we're looking so closely at code, it can be difficult to keep our users' needs in mind, no matter how much we talk about them in retrospectives or planning meetings. However, our technical solutions become immensely more successful when we keep our users in mind. Particularly for organisations with little to no specialist UX presence (trust me, they exist), it's important that developers fight the good fight for our users.

Peter Morville's User Experience Honeycomb is a classic UX diagram outlining the seven essential aspects of UX. Like any classic text, it's been argued over, but I think it's a great starting point for everyone involved in creating innovative products and services for humans. Which should be...all of us.

I've used Katerina Karagianni's optimised diagram of the honeycomb, as she draws useful connections between its disparate parts to convey how users use products, as well as how they think and feel about them. 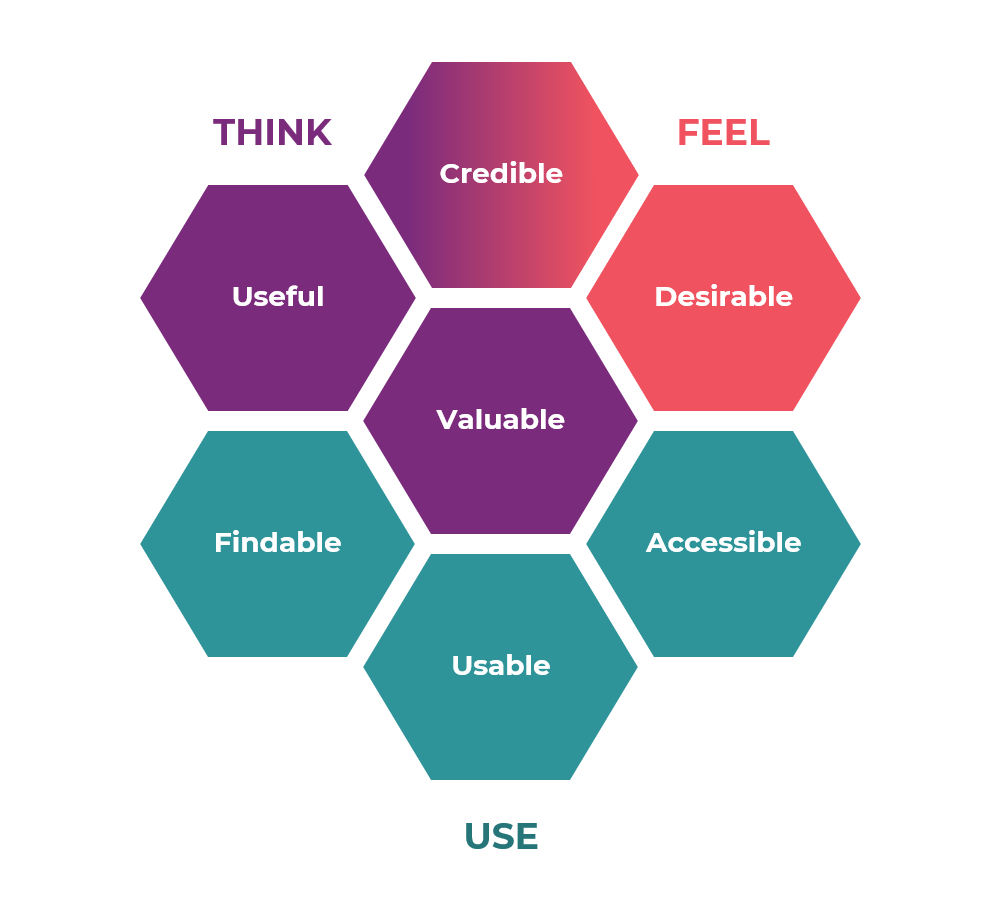 Does the product, service or feature serve a purpose for your target customers? If it does, it's useful.

Remember, usefulness is in the eye of the beholder. It's all about your target market. A particular feature of a video game (like character customisation options) might not seem useful to everyone, but to a gamer, it might be an essential sticking point that will define whether they play a game or not.

Consider Spotify's personalised playlists. One of the reasons people pay for streaming services is for content that's personalised for them. Most people will open Spotify for a particular purpose: to find new music, or to listen to their existing favourites. Spotify caters to both with personalised daily playlists, as well as a 'new releases' one. I don't have the stats on me, but I'd wager a guess that these playlists serve the purpose of a lot of the platform's users.

Usefulness does not equal usable. Usability concerns your users' ability to effectively and efficiently achieve their end goal. How many clicks, for instance, does it take a user to reach their desired page?

Everything from the server, to the HTML to the visual factors of a website or app should be optimised for ease of use. Tools such as Usabilla, Webpage FX and Pingdom can help you test for usability.

Furthermore, websites and apps should be intuitive enough for users to become experts at using on their first visit. This should iterate through each release, so if you release a new feature, or do a major redesign, there should be some tutorial help for the user to familiarise themselves.

This is all about navigation. Is the information your user seeks easy to find? Is your navigational structure intuitive? If you're designing a music or video streaming site, the quicker I can get to the content I want, the happier I'll be.

Many UX and UI designers will talk about the 7 ± 2 rule, which comes from one of the most highly-cited papers in psychology, written in 1959 by George A. Miller. It's often interpreted by designers to argue about the size of navigation menus. That's not strictly applicable in today's world where menus can be deep and complex, but it's still useful to keep in mind when you're designing navigation. If you're designing a site with lots of sections, make sure you're using headings or dividers to denote structure.

To bring us back to our Spotify example, lead designer Andrea Limjoco redesinged navigation on the app to include music and podcasts with a user's library. She successfully condensed what might have been a complex menu to be a sleek, simple and intuitive swipe motion, optimised to take advantage of users' natural actions on mobile devices.

Credibility refers to the ability of the user to trust in the product you provide, in terms of your ethics, durability, and accuracy. As a developer, you won't have direct control over every aspect of this.

However, development teams are responsible for delivering a product which lives up to what it promises. For instance, companies like Spotify or Netflix promise a seamless streaming experience. In a highly-competitive market, any consistent failures on their part will lead to people leaving the service and moving to another company.

Your product or service should be accessible to users of a full range of abilities. There is lots of literature out there on accessibility. Start with a11y and make sure you're conscious about auditing for accessibility constantly. If something seems off to you, don't be afraid to bring it up.

There is a considerable business case to be put forward here, even if your employers aren't receptive to the moral argument that everybody should be able to access the internet. In the UK alone, disabled people and their families have estimated £212 billion to spend.

Lastly, basic accessibility is a legal requirement in many countries, so the failure to take it into account is serious.

This aspect might seem like it's all about branding. But branding doesn't come from nowhere. Apple isn't successful just because their products are aesthetically pleasing, though it's certainly an edge for them. They back it up with quality. Spotify and Netflix are largely comparable to several streaming services out there, but because they were first in the game, and have the investment to funnel into innovation, they're seen as the cream of the crop. This is something a reputation that development teams contribute to and have responsibility for.

When you're developing a new feature, ask yourself if it's adding to the worth of the product? Is it something that people will talk about? If it's not, consider questioning it.

Your product or service must deliver value to the business and to the customer. Like all aspects of UX, this is dependent on your users. Some user groups will value desirability over accessibility, and vice versa. It's up to you to work with the balance between customer wants and business priorities, but we should always question decisions that prioritise profit over seamless experience.

Final mention of Spotify, I promise. In July 2015, the company launched their 'discover weekly' playlists. By December of that year, they had been streamed 1.7 billion times. This generated huge value for the business, but it was also of immense value to users who, like me, were often too lazy to search out new music, but relished the chance to have it presented to them.

We don't all have to be UX experts. However, it's important that we keep focus on the bigger picture, even when we're developing small features or fixing bugs. By keeping these seven key aspects in mind during development, and communicating them to our teams, we can ensure we're doing our best for our end users.